The announcement made by uranium giant Cameco in November that it’s suspending operations at its flagship McArthur River mine in northern Saskatchewan and surprisingly deep three-year cuts by Kazakhstan’s state-owned Kazatomprom provide a "step change" for uranium prices says a new report on the sector from Cantor Fitzgerald equity research.

On Monday, the world largest producer of uranium, surprised the beleaguered market with a larger than expected cut to production of its own.

Two weeks ago, Kazakhstan’s state-owned Kazatomprom announced intentions to reduce its output of U3O8 by 20% or 11,000 tonnes (around 28.5m pounds) over the next three years beginning in January 2018. According to the company roughly 4,000 tonnes will be cut in 2018 alone "representing approximately 7.5% of global uranium production for 2018 as forecast by UxC."

Cameco's shuttering of McArthur River for ten months is expected to reduce production by 13.7m pounds in 2018 translating to a combined 42.3m pounds of expected production that has been removed from the market. In 2018 alone, the reduction will be about 24.1m pounds of U3O8 or about 15% of Cantor Fitzgerald's prior forecast of 158.4m pounds of output.

The price of commodities is set by the marginal cost of production and when two of the largest producers’ shutter facilities, it means prices have fallen to uneconomic levels. Uranium isn’t exactly fashionable but it is still required to fuel reactors all over the world. If supply is being curtailed prices will have to rise to attract producers back into the market. 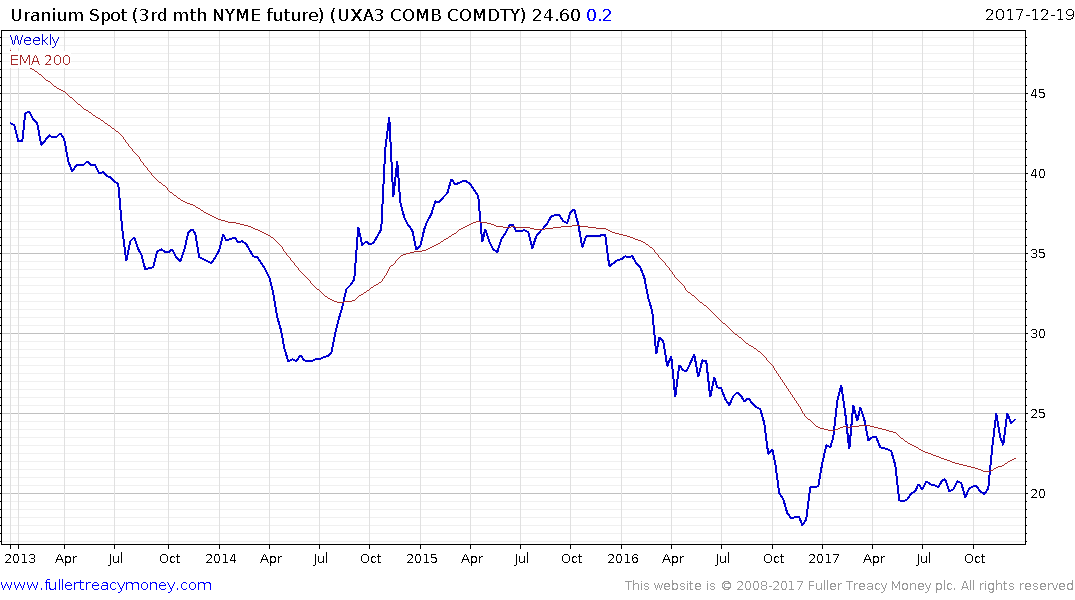 The uranium price bounced from the $20 area over the last week but is now pausing in the region of the February peaks near $25. A sustained move above this area will be required to signal a return to demand dominance beyond the short term. 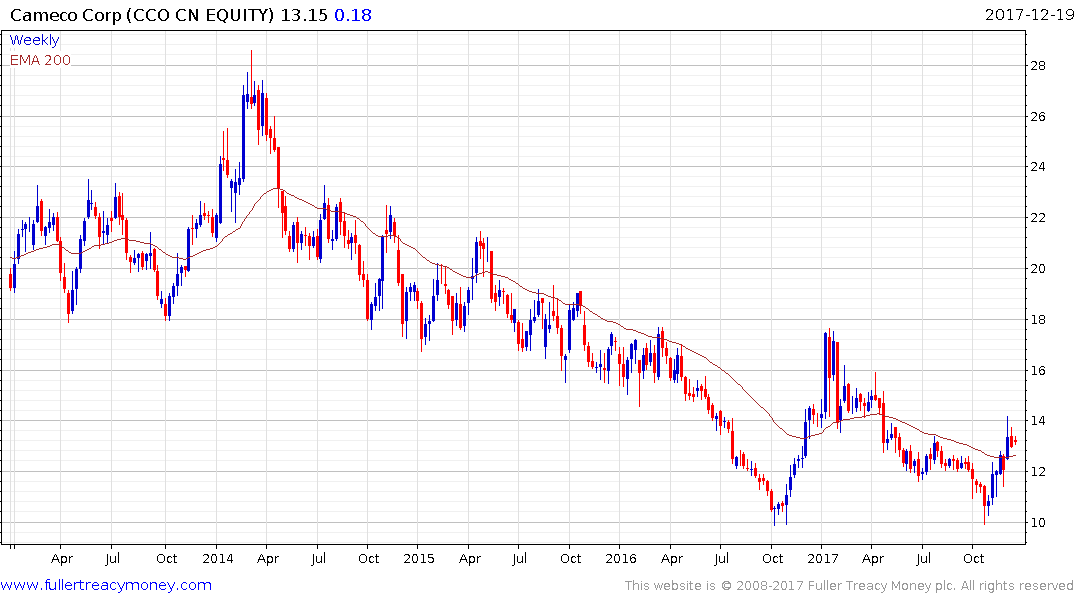 Cameco retested the C$10 area in October and has now rallied to break this year’s downtrend. It will need to hold above the trend mean to confirm a return to medium-term demand dominance. 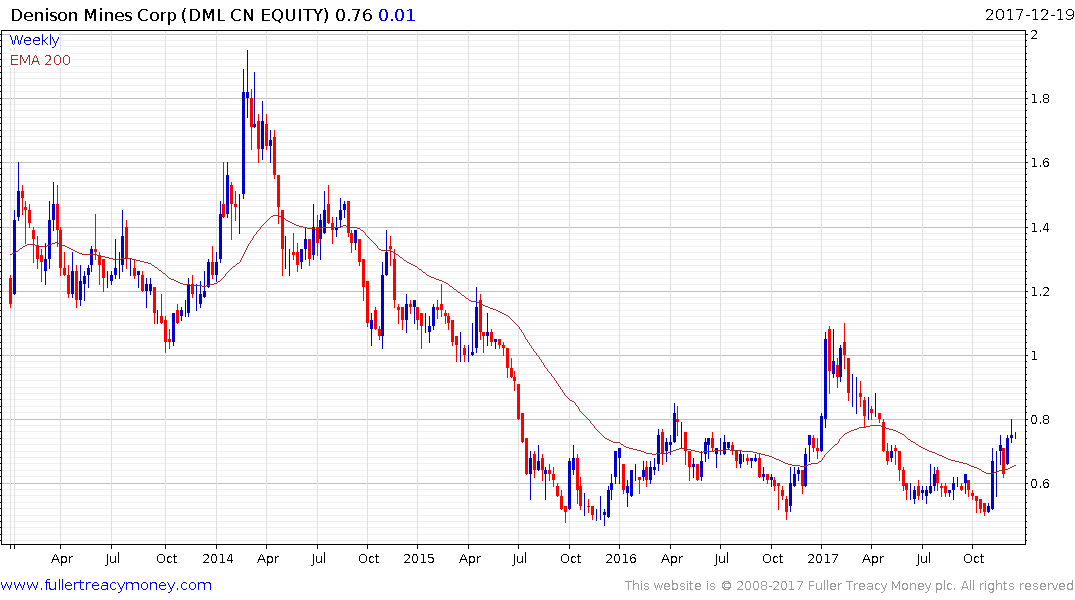 Denison Mines has been ranging above C50¢ since 2015 and is back testing the upper side near C80¢. 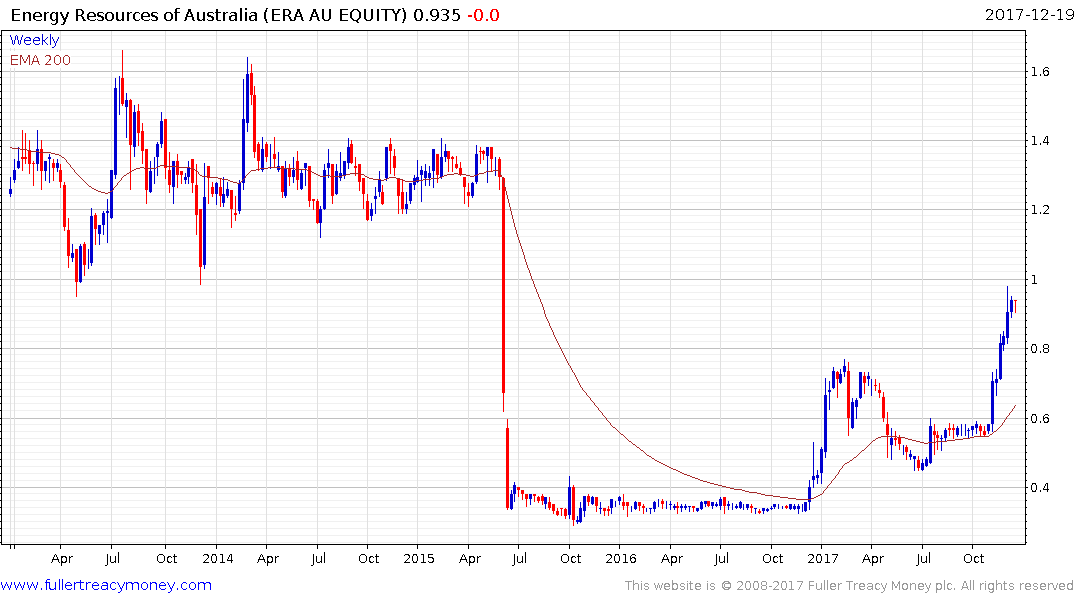 Energy Resources of Australia has rallied steadily since November and is now pausing below the psychological A$1 level. Some consolidation is possible in this area but a sustained move below A80¢ would be required to question recovery potential.