Frackers Are in Crisis, Endangering America's Energy Renaissance
Comment of the Day

Texas oil people who’ve lived through past busts remain resolute. This spring the Railroad Commission of Texas, which regulates the oil industry, considered limiting crude production in the hope of bolstering prices amid the Saudi-Russia price war. Some Texans reacted with disdain. “Texas, out of all states, represents a humble, steadfast resolve that refuses to sacrifice its principles due to foreign influence,” David Dale, a Houston-area land manager for oil and gas producer Ovintiv Inc., wrote to the commission. Troy Eckard of Eckard Enterprises LLC in Allen, Texas, told regulators that Russia and Saudi Arabia are “terrorists” whose “game of supply hostage is not the time to bow down and sell out. Let the weak go broke. Let the overpaid, poorly run private equity-back[ed] companies fall by the wayside. Leave us to our own free-market solutions.” The commission stood pat.

As oil historian Daniel Yergin has observed, companies go bankrupt, rocks don’t. Assuming prices slowly recover, producers will begin to turn wells back on—a process that’s never been tried at this large a scale—and maybe drill some new ones. Whether they start paying pumpers better remains to be seen. Opportune LLP, a Houston energy advisory firm, says pumpers and other service companies face “a test of survivability, not profitability.” Consolidation seems likely, with producers themselves possibly acquiring the smaller service companies on the cheap.

The initial surge in production from shale oil reserves was driven by wildcatters and the viability of the business model was predicated on high prices persisting. The reality that much of the USA’s shale production is higher cost is now leading to many of these companies going bankrupt or experiencing significant problems.

Chevron’s announcement that it is taking Noble Energy over is a sign of what is to come. The better properties are likely to be consolidated under the ownership of the majors who will bring economies of scale to bear. That should help to reduce the average cost of production but it will represent a difficult transition for many independent oil companies.

Chevron is a dividend aristocrat and has been paying a dividend for more than a century. The share rebounded from the March low to close its overextension relative to the trend mean and has paused over the last six weeks. It bounced last week from above $80 and extended the rebound today. A sustained move below $80 would be required to question medium-term scope for continued upside.

Exxon Mobil has now also put in a higher reaction lows and will need to continue to hold the $40 area if recovery potential is to continue to be given the benefit of the doubt. 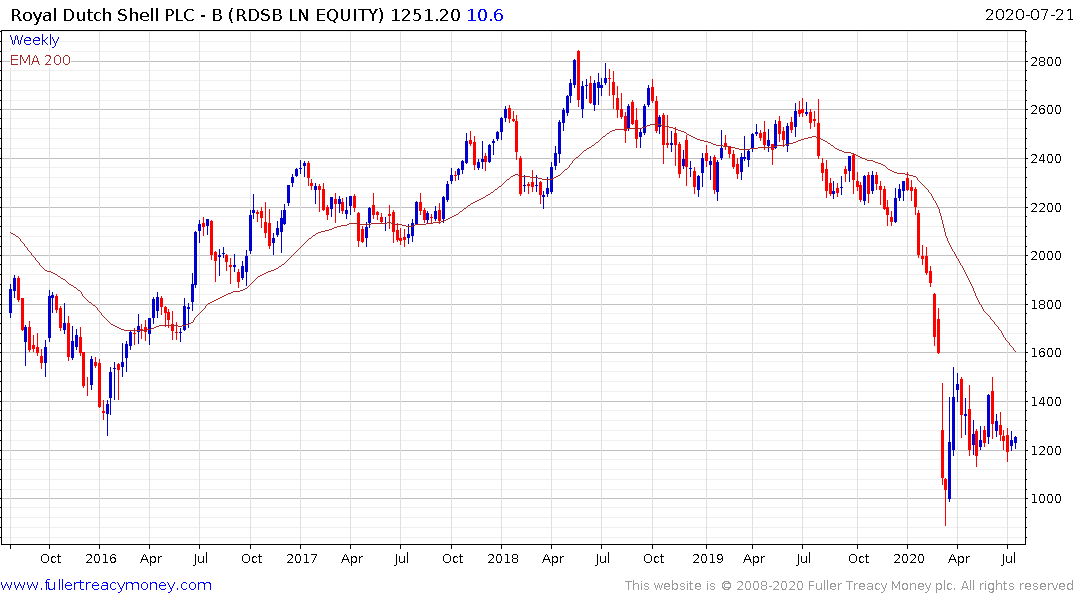 Royal Dutch Shell’s recovery has been hampered by the cutting of the dividend. It also found support in March and has been ranging above the psychological $1000 since.