On perceived deficits in the lithium market
Comment of the Day

On perceived deficits in the lithium market by Eoin Treacy

One point I find extremely interesting is that the countries that always were low price buyers, trying to secure the cheapest Chinese product, have now been shut out due the price run-up in China and the VAT penalty creating a disincentive for exports.

I have been approached for help in securing product by companies in India and in similar markets, who in the past always sought the lowest price. These companies, faced with shutting down their plants, have offered US$28,000 – US$30,000/Mt, in advance, for lithium hydroxide.

Unfortunately, since they have no relationships, supply for these companies is hard to come by. What we considered the bottom of the market appears to prove that demand destruction is not a major concern. On the other hand, the Japanese have contracts at low prices for much of their 2016 volumes and seem to be in denial that they will have to pay much higher prices in 2017.
I see a return to a normalized global price range as a major theme for 2017.

Any thoughts on how Tesla’s (under construction) giga-factory fits into global battery markets?

Yes, good question. The western press seems fixated on the Tesla giga-factory; however Tesla is really just one of many large battery projects worldwide. China has multiple projects, some of which, although smaller than Tesla’s planned operation, are already in production and will grow in phases.
I think what Tesla is doing is great, but it’s only part of the global story.

Based on extensive meetings around the globe, are there critical events on the horizon that could shake things up?

As long as China continues a reasonable level of support for battery related initiatives and there is not a major global recession, I think lithium ion battery demand for non-consumer applications has reached a tipping-point, ensuring robust lithium demand for the next several years.

Until quite recently the market for lithium batteries was confined to the impressive growth rate for hand held devices. The increasing penetration of electric vehicles into the passenger transport sector represents an additional growth trajectory not least because major car manufacturers plan to have vehicles in the $30,000 bracket on the road within two years. A third strand for growth is represented by industrials and utilities seeking to smooth the pattern of supply and demand or to employ remote power generation facilities.

Against that background lithium prices have jumped over the last year but major expansion plans are also underway by all of the top suppliers. The growth trajectory of the above sectors will need to continue if the medium-term bullish case is to remain credible. 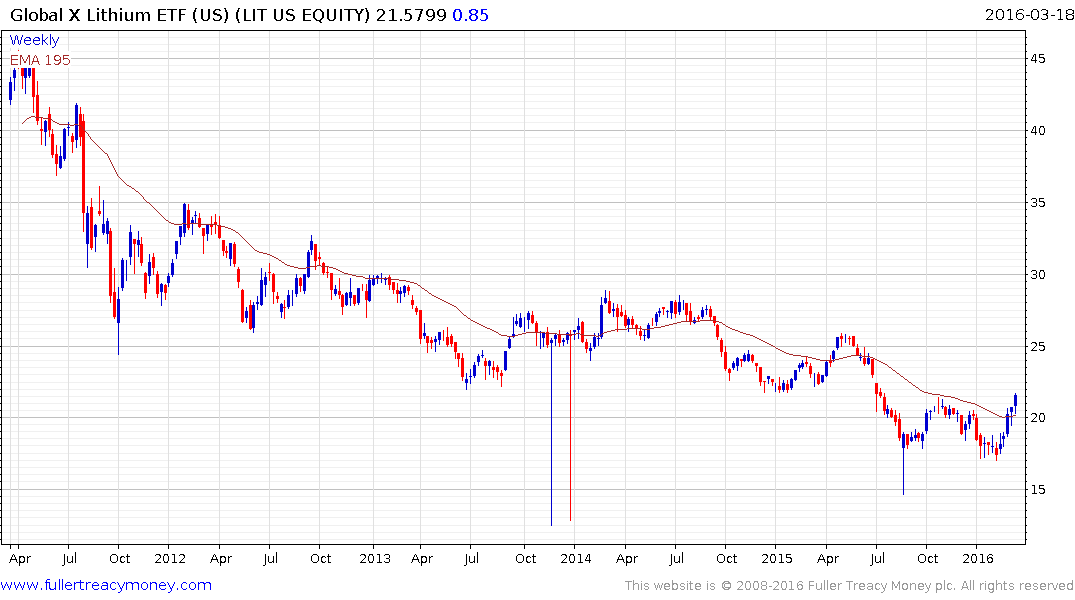 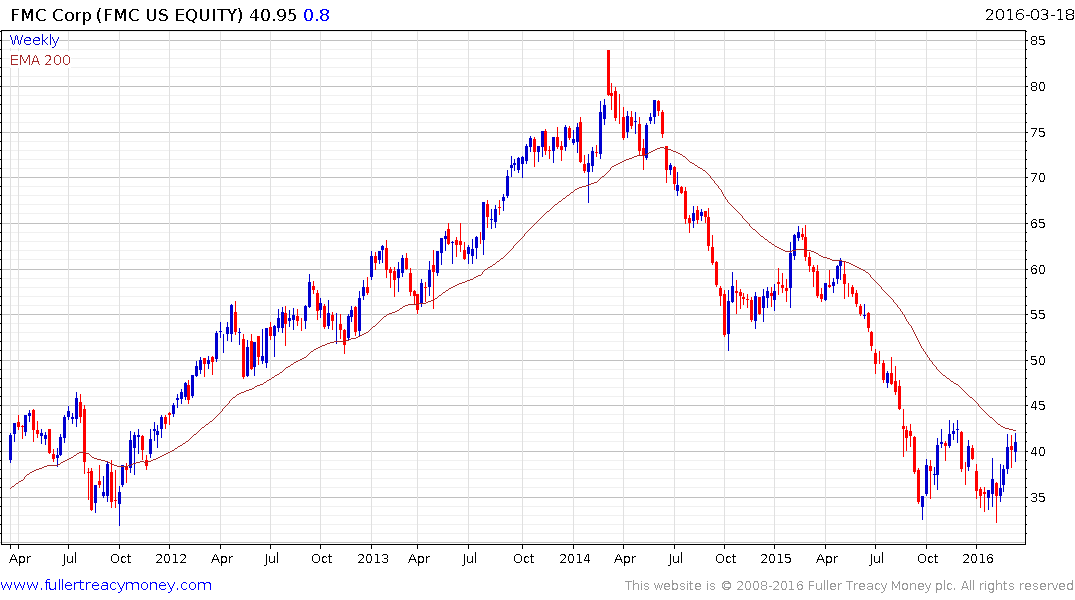 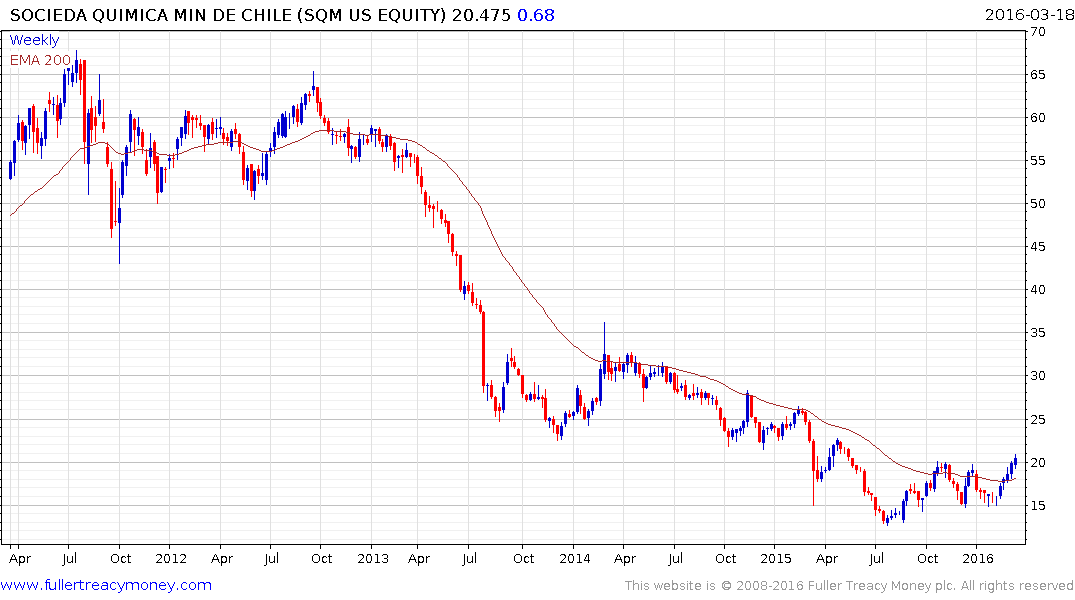 The Global X Lithium ETF, which includes both the shares of battery manufacturers and lithium miners, rallied this week to break the medium-term progression of lower rally highs. FMC Corp and SQM have similar patterns to the ETF. 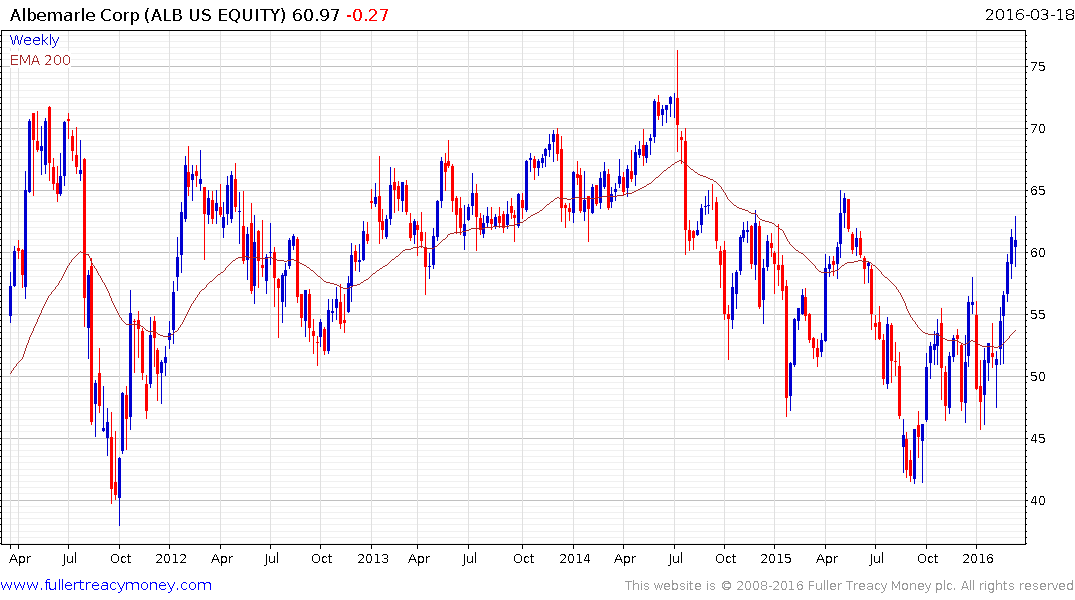 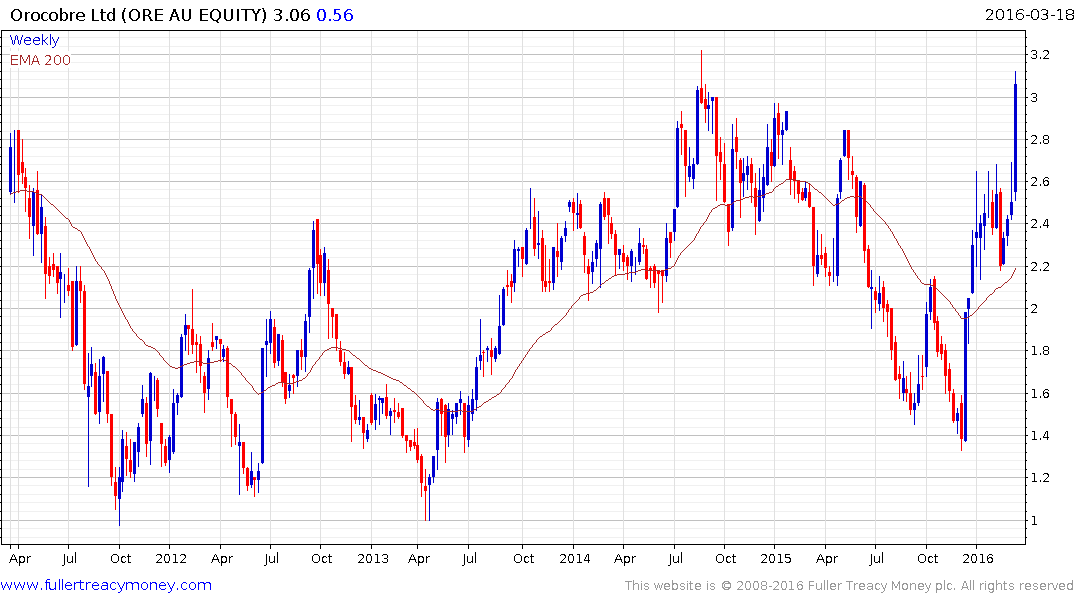 Albemarle and Orocobre share reasonably similar patterns and both are pulling away from their respective 200-day MAs. 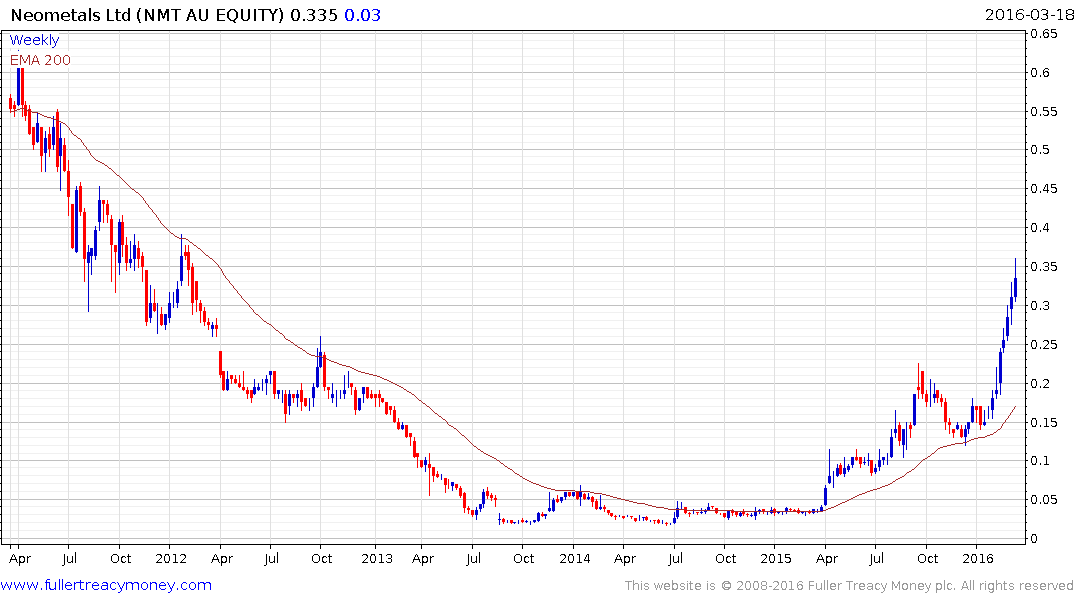 Neometals has rallied impressively for nine consecutive weeks and a wide overextension is now evident relative to the trend mean. Some consolidation is increasingly likely but a sustained move below A20¢ would be required to question medium-term recovery potential.