Nickel rallied to the highest in more than seven years as surging sales of electric vehicles leave carmakers racing to lock in supplies of the critical battery metal.

Prices of the metal jumped as much as 3.4% to $21,500 a ton, the highest since May 2014, as Tesla Inc. moved to secure future supplies from Talon Metals Corp. That added fresh impetus to a rally built on surging sales of electric vehicles, which has also pushed other battery metals including lithium and cobalt sharply higher.

In other major investments in the battery sector, chemicals maker LG Chem also said Tuesday it will spend 500 billion won ($420 million) by 2025 to build a battery materials plant, while BHP Group on Monday said it will pay $100 million to take a stake in an early-stage nickel project in Tanzania.

While the race to secure future supplies is heating up, there are also growing signs of limited spot availability on the London Metal Exchange. Inventories tracked by the bourse fell for a 50th consecutive day on Tuesday, in the longest run of declines since 2000.

“We have so many stories all pointing in the same direction,” Michael Widmer, head of metals research at Bank of America, said by phone from London. “People do realize that there is potentially a tightness in supply going on, and that is taking prices ultimately higher.”

Nickel contributes to battery energy density but also to combustibility. Tesla may be securing additional nickel supplies and BHP is investing in new production in Tanzania but Tesla is also now selling lithium/iron/phosphate batteries in the USA which are less energy dense but do not need nickel or cobalt.

The primary reason nickel is breaking out is because pig nickel refining is extremely energy intense. The power crunch in China late last year knocked out refining capacity. If the cost of the carbon emissions were ever included in the production calculus for this form of nickel it would be completely unviable. That’s contributing to increased imports of the metal to China which is resulting in tight supply. 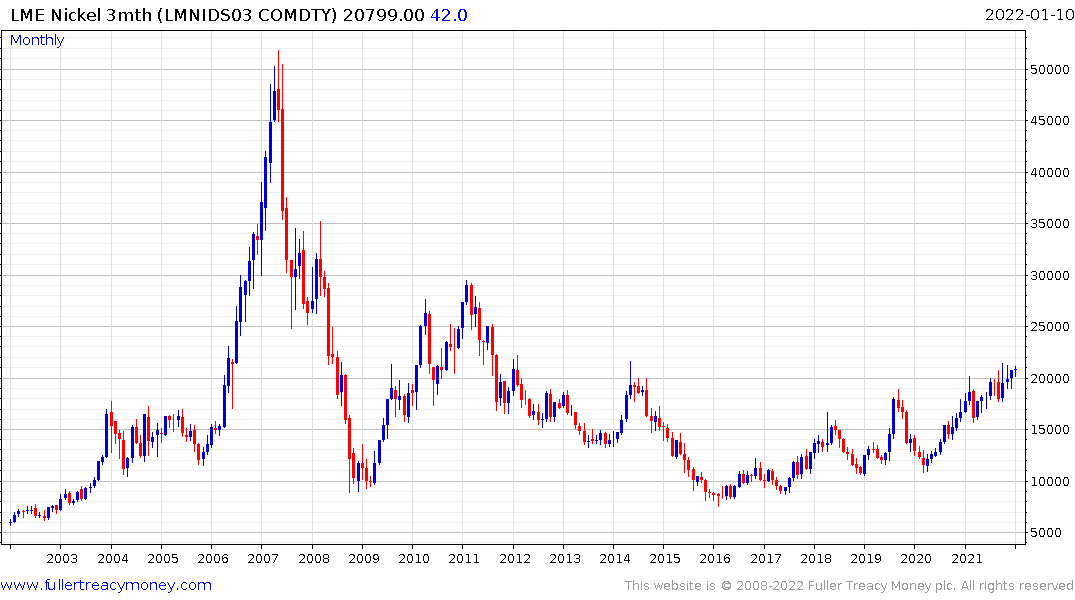 Nickel is completing its base formation. 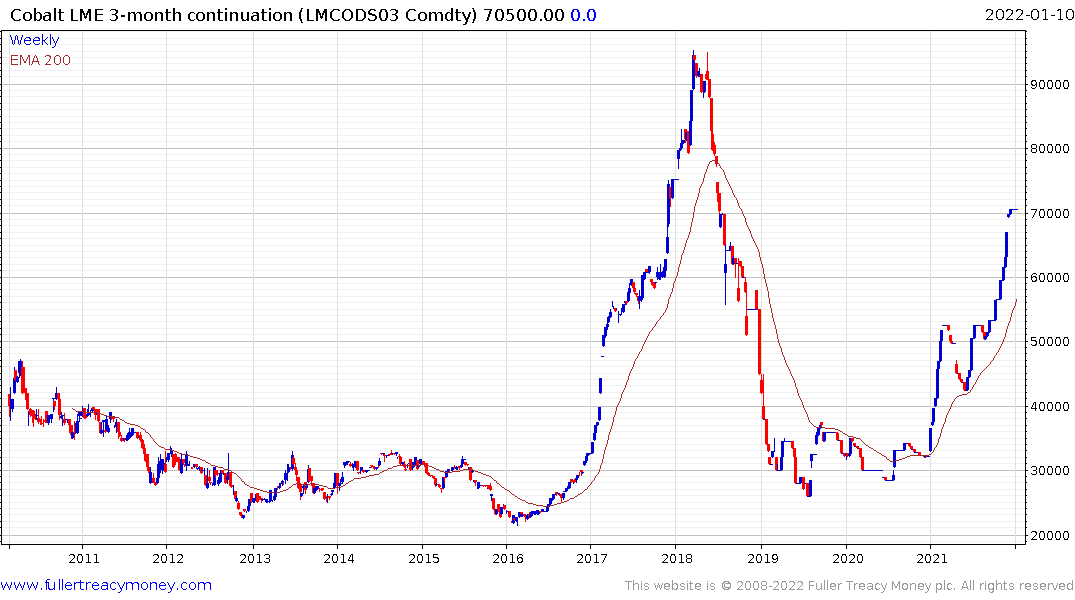 Cobalt completed its base formation a year and continues to trend higher. 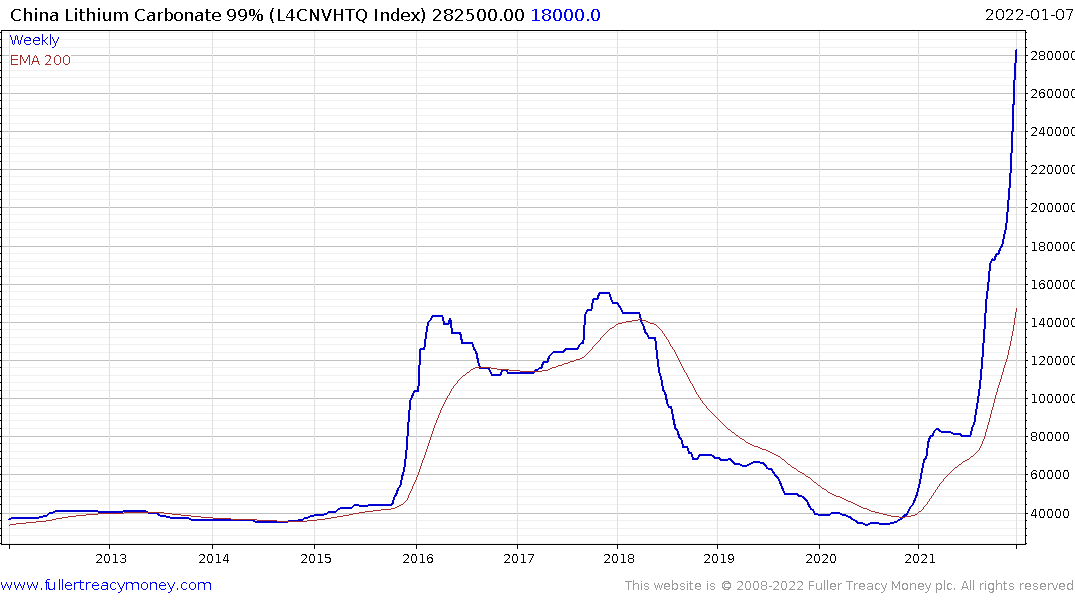 Lithium broke out at the end of 2020 and has surged almost 6 times since then with now sign the acceleration is over. 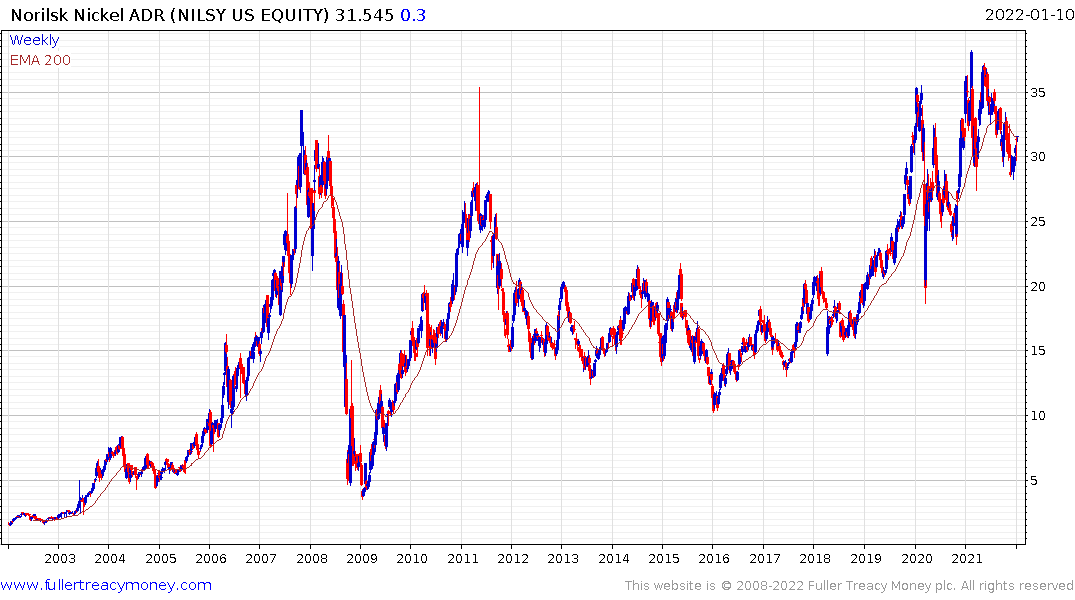 Norilsk Nickel rallied today to break a seven-month downtrend as it continues to consolidation in the region of the 2007 peaks. 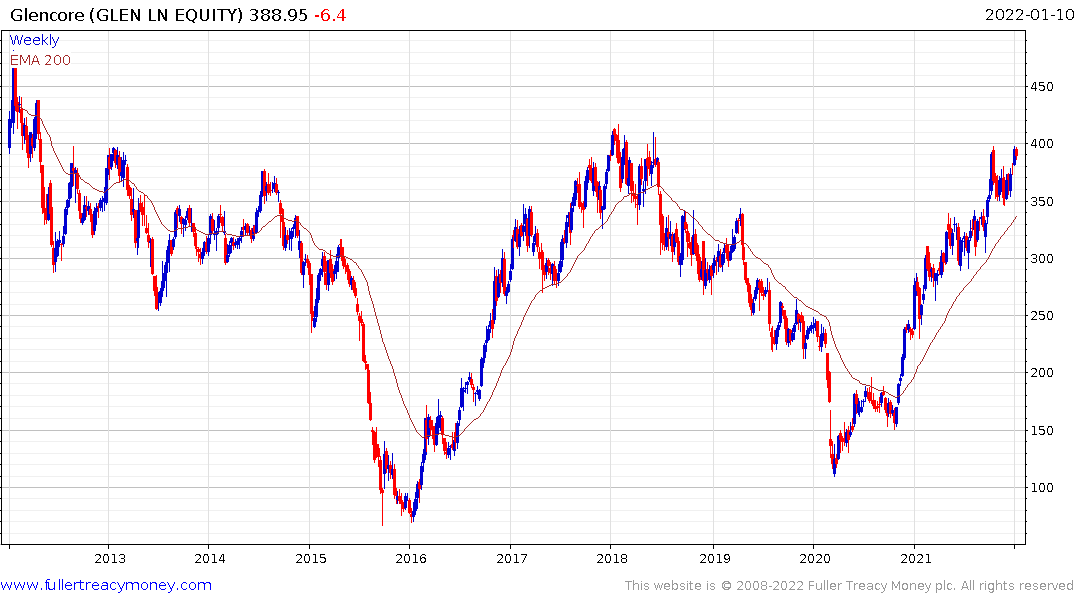 Glencore remains in a consistent uptrend as it tests the upper side of a six-year base formation. 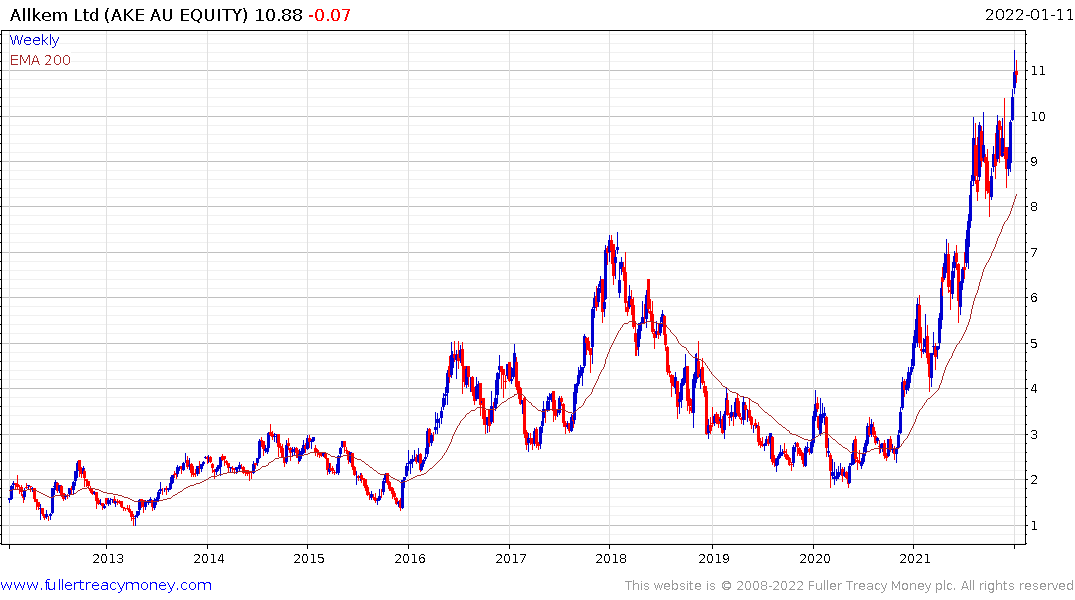 Allkem is somewhat overextended in the short-term but remains in a consistent medium-term uptrend.