Email of the day - on renewables
Comment of the Day

Email of the day - on renewables by Eoin Treacy

ETFs TAN and FAN: what is your opinion on the quality of the constituents in both products? I do believe going forward this be a huge trend. but how many companies will make it to the other end? thanks very much for educating us in these turbulent times!

Thank you for your kind words and this question which may be of interest to other subscribers. The renewables or alternative energy sector was a clear outperformer into the beginning of March but quickly played catch up with the wider market during a panicky period two weeks ago. I believe it is certainly worthwhile to ask whether the factors which contributed to earlier outperformance are still relevant following what are in some cases declines in the order of 50%.

This report from JPMorgan, dated March 18th may be of interest. Here is a section:

As recently as March 9th, wind and solar stocks were outperforming the S&P500 massively on a YTD basis, but the oil shock and COVID-19 caught up with the space, which has since underperformed dramatically in just one week of trading.  Last into the bear market, we can see justification for Alt Energy stocks to be first out once COVID-19 peaks because a) supply-chains and production have already largely recovered, b) most utility-scale projects have long lead-times that should buoy demand through a one-quarter recession, and c) falling wind and solar unit costs should continue to buoy medium-to-long-term demand for renewables with or without policy support.  Our Top Picks remain First Solar (FSLR), Solar Edge (SEDG), Sunnova (NOVA) and SunRun (RUN), all Overweight Rated.

The Solar ETF is heavily weighted by solar cell manufacturers and AC/DC inverter manufacturers. There are also companies that own utility-scale solar utilities and install residential units. It is also quite internationally oriented, not least because many manufacturers are based in China and many solar assets are in emerging markets.

The Wind ETF is much heavily weighted by European companies and has a much greater weighting in utilities than the solar ETF.

The collapse of short-term interest rates and the increasing likelihood of infrastructure development projects, globally, represent medium-term tailwinds for the alternative energy sector. The collapse of the oil price is a headwind in the short term and the difficulty of consumers in making rent, mortgage, auto loan and utility payments also represents a near-term headwind. 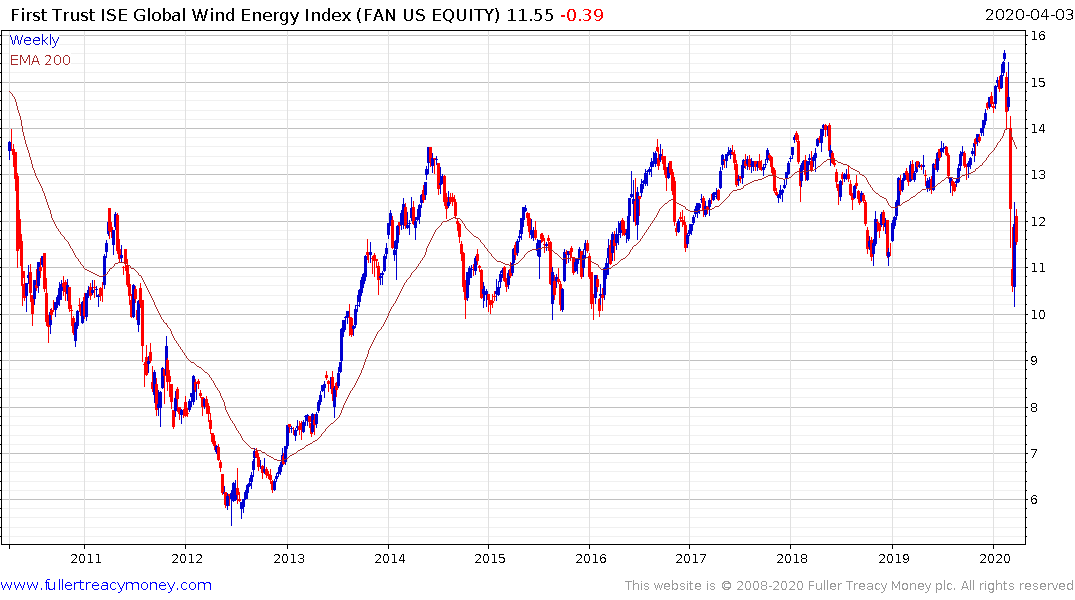 The First Trust Global Wind Energy ETF collapsed back to test the lower side of the six-year range where it has found near-term support but some support building will likely be required before a medium-term low is confirmed. 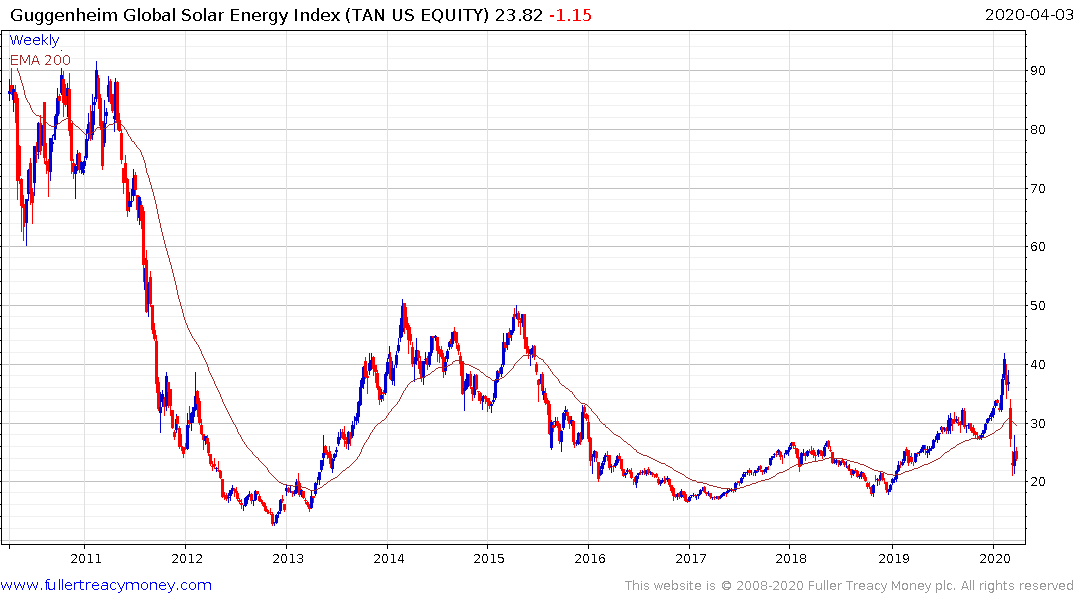 The Invesco Solar ETF has also unwound all of last year’s advance is back in the region of it slows from the last five years.

The reason investors were interested in the renewables sector a month ago was because it was demonstrating relative strength relative to fossil fuels. That was a clear divergence from the past pattern which is likely to continue in future. The current trouble is credit market related.