Covid-19 and Global Dollar Funding
Comment of the Day

That risks a slow balance sheet response from the Fed…

…on top of the Fed’s plan to soon end liquidity injections via repos and bill purchases.

given that the yield curve has been inverted for over a year, Treasury supply has been absorbed by primary dealers and hedge funds on the margin, funded in the repo market by money funds. Figure 9 shows that money funds have absorbed $600 billion of inflows over the past year and rate cuts could send those funds back to the bond market, precisely when the funds are needed in the money market.

Our concluding point is this: If the outbreak worsens, funding market pressures can easily escalate. Rate cuts will help, but rate cuts, if they re-steepen the curve materially, can exacerbate funding pressures.  Our recommendation for the Fed would be to combine rate cuts with open liquidity lines that include a pledge to use the swap lines, an uncapped repo facility and QE if necessary.

The Credit Suisse team do an excellent job of highlighting where the risks are and provide a handy list of instruments to monitor to get an idea of how liquidity flows are functioning. 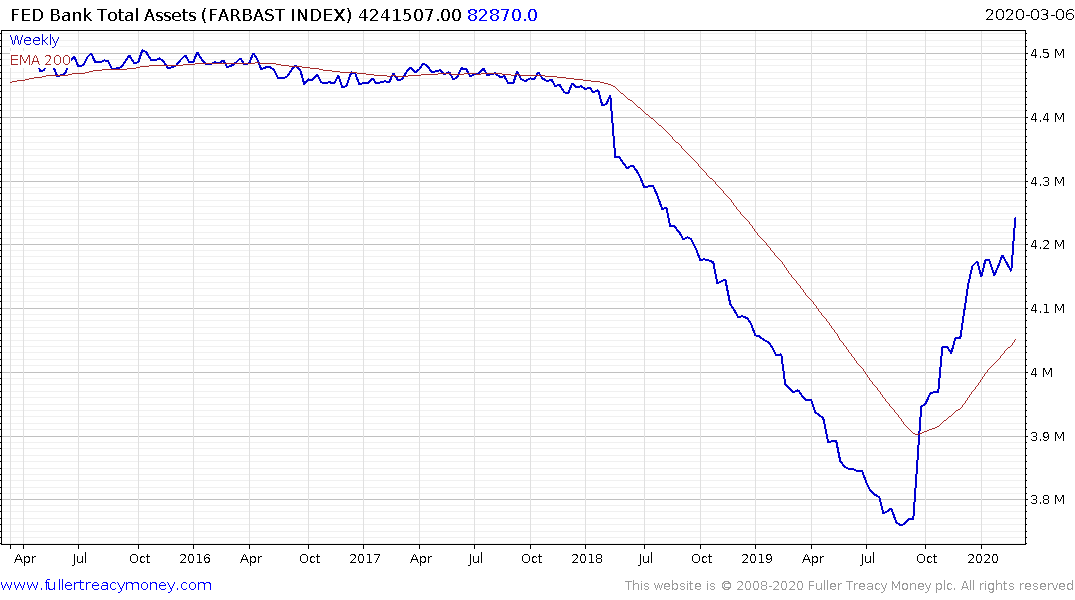 The repo market illiquidity in September was a signal to everyone that the tightening program had gone too far. There was nowhere near enough available capital in the system to allow the global money market to function. The Fed stepped in with a large swift injection of liquidity; inflating its balance sheet by $400 billion in four months.

The global economy is quite likely to contract mildly in the first quarter and the US economy will continue to outperform. However, the 2nd quarter is likely to bring worse news with the US likely to struggle to grow at all. That raises the potential for technical recessions in a range of countries. On the supply side, the speed with which China gets back to work will be key to a recovery scenario while demand is likely to at least moderate as the virus proliferates internationally. That suggests a knock-on response to growth.

It is now increasingly likely the Federal Reserve is going to cut interest rates by another 50 basis points at the March meeting but to also implement what is effectively a standing repo facility. There is absolutely no way the market can tolerate the reduction of monetary assistance to the money markets at this stage. Additionally, the requirement is going to be even more urgent because low interest rates inhibit the ability of banks to extend credit and they will be hoarding cash because of economic uncertainty. That will basically cement the Fed’s position as central banker to the world but it will put upward pressure on the size of the balance sheet. 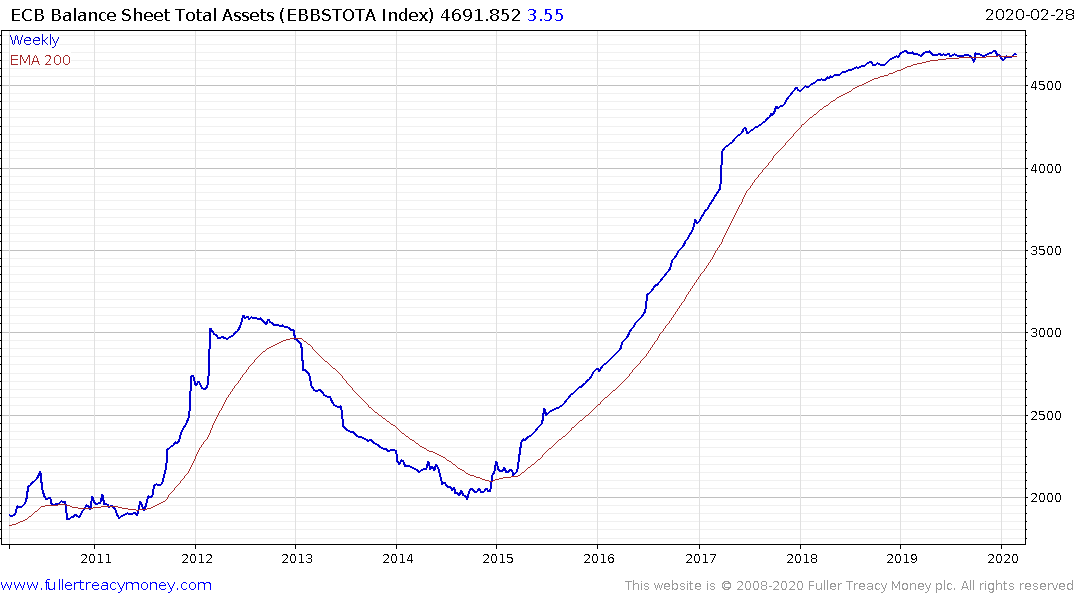 The only central bank that tried to reduce the size of its balance sheet previously was the ECB. They took out €1 trillion and had to put €2.6 trillion to compensate for the deflation that contraction sparked. If the Fed follows a similar trajectory the size of the balance sheet of the balance sheet is likely to reach $6 trillion. There is also likely to be a concerted effort by global central banks to boost liquidity, engage in quantitative easing and increase spending.

The yield differential between the S&P500 and the 10-year Treasury hit a new low today. The big question for investors is how well corporate profits are going to hold up. If the hit to earnings is modest the yield differential represents a clear value opportunity. On the other hand, if the hit to earnings is significant, it will knock back the ability of companies to sustain dividends which would question the validity of the metric.

I believe it is more likely companies will cut buybacks before they cut dividends. With the compression in government bond yields there is also an argument companies will continue to borrow to fund buybacks. The challenge for earnings however, is likely to be a causal factor in a number of companies being downgraded to junk. That suggests a patchy environment overall. 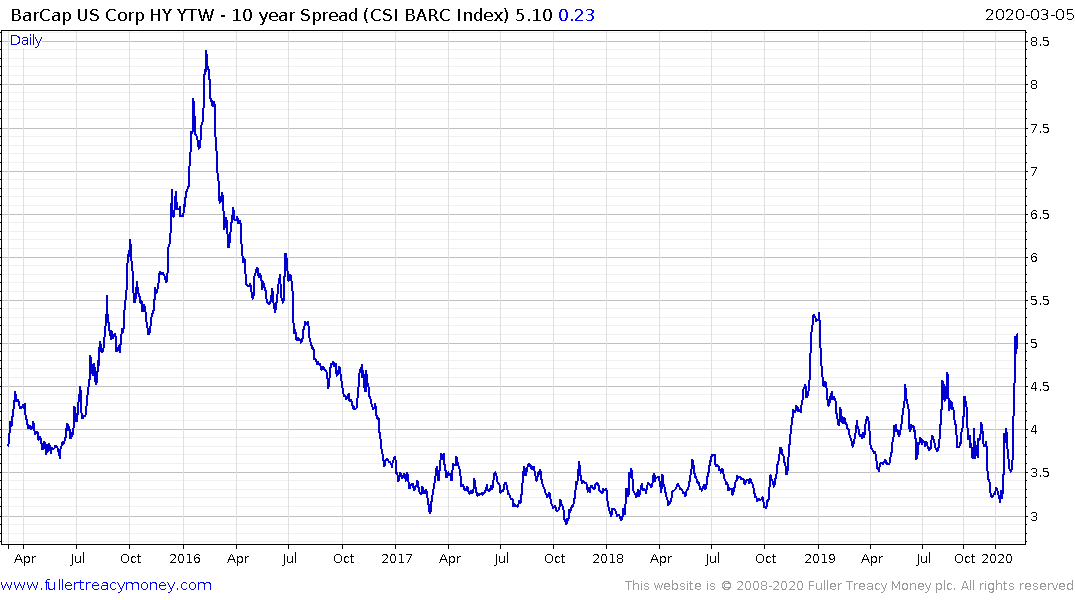 So far high yield spreads have been reasonably well contained but popped higher to test the psychological 500 basis point level this week. This is an important market to monitor for getting an idea of how much risk is being priced into the credit markets. 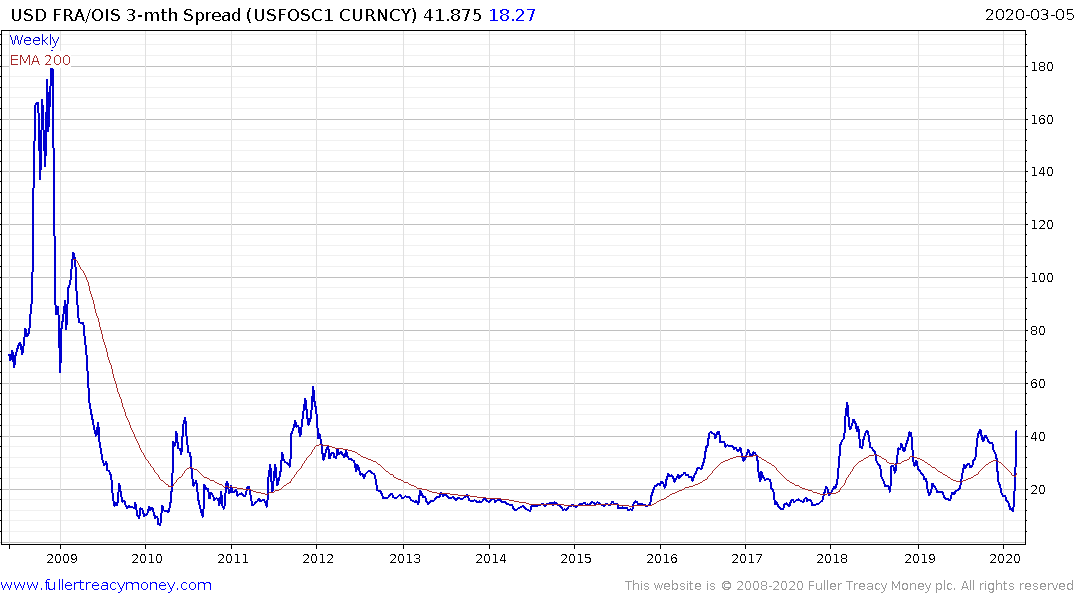 OIS spreads has been ranging below 50 basis points since 2009 so would need to sustain a move above that level to signal stress in funding markets. 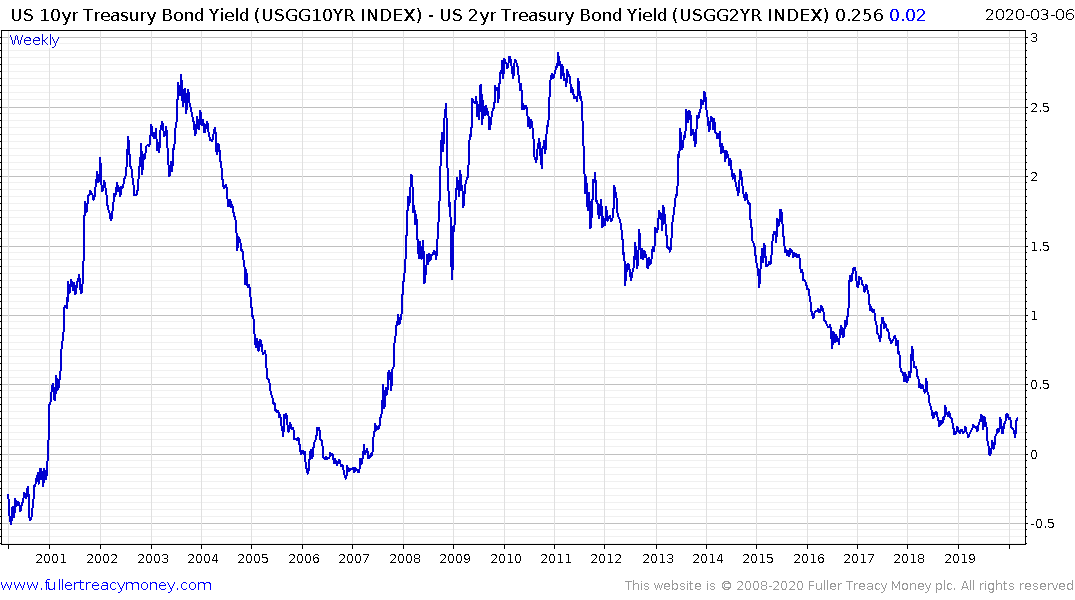 The 10-year - 2-year yield curve spread is still reasonably well continued. I’ve been highlighting for some time that the most urgent signal from the yield curve is when it surges through 50 basis points following an inversion. We have not seen that yet. 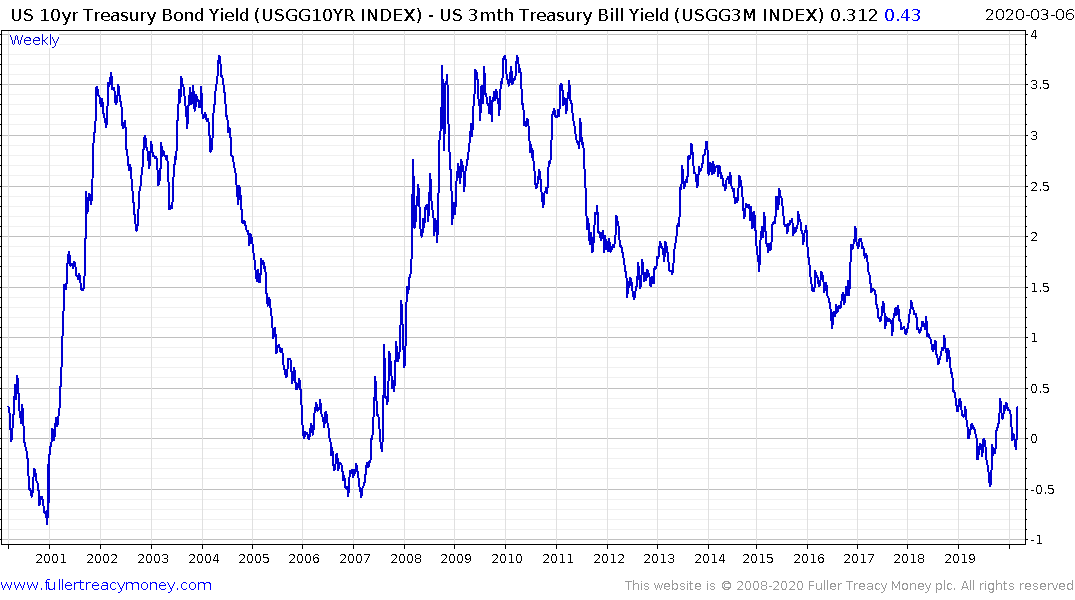 The 10-year - 3-month spread, which is the measure the Fed appears to be most alert to, spent most of 2019 inverted and is now rallying in a sharp manner from the zero bound. It is not yet above 50 basis points. 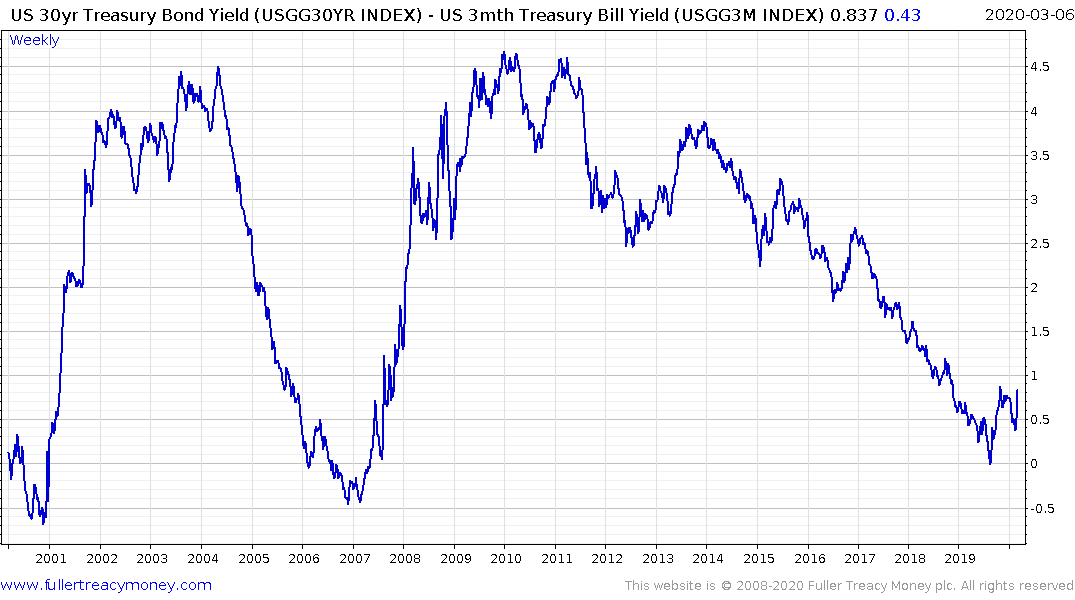 The 30-year - 3-month is further along because the long end has only really just started to reflect the risk of deflation. 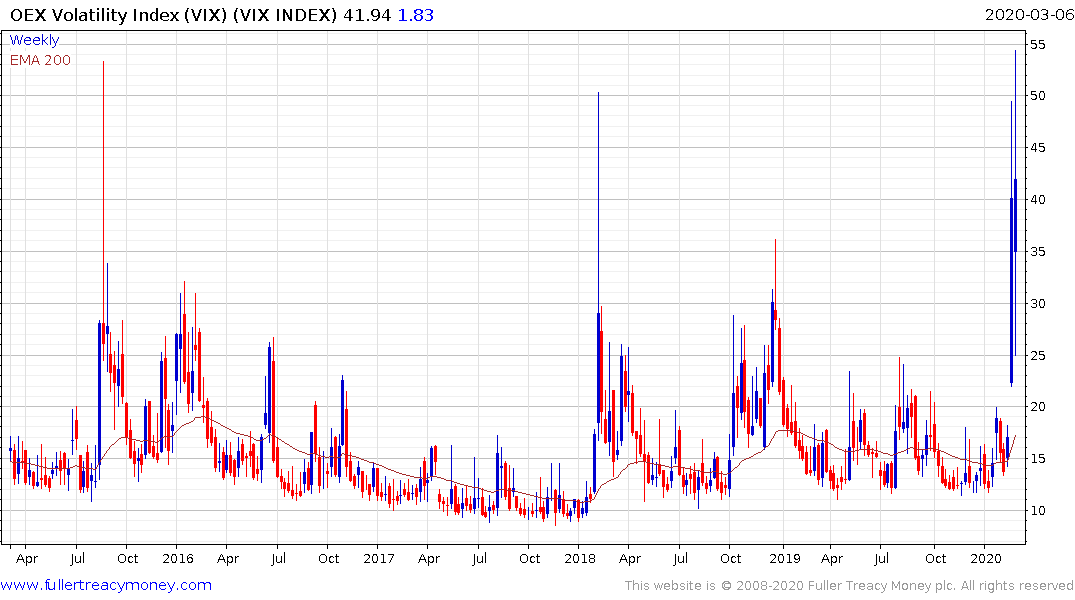 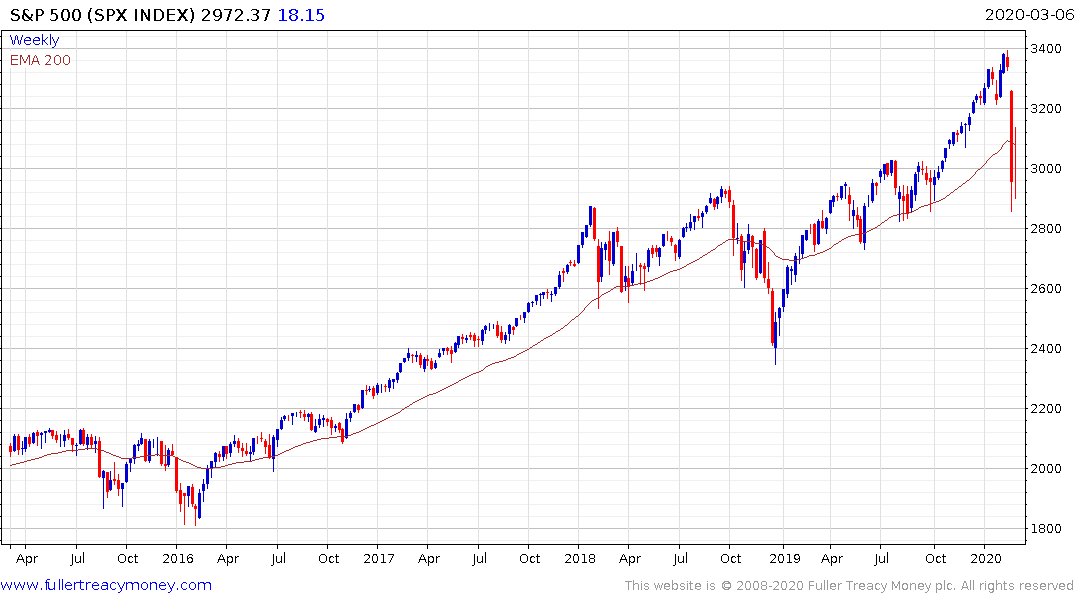 The VIX Index pulled back from the psychological 50 again today and the S&P500 closed well off its lows. The size of the break below 3000 is not yet enough to signal a failed upside break. 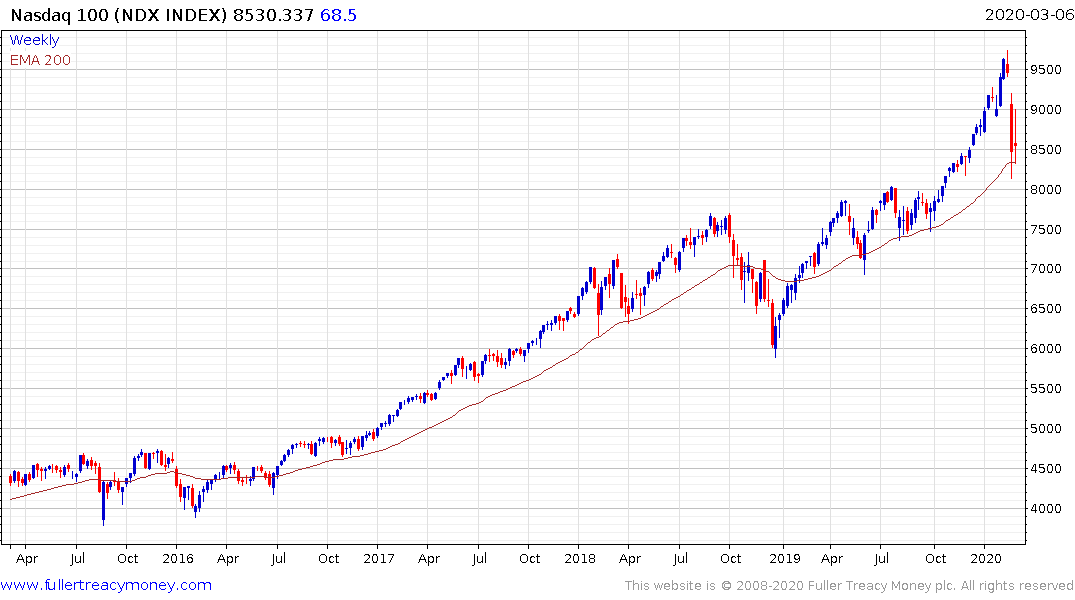 The Nasdaq-100, meanwhile, continues to hold the region of the trend mean. 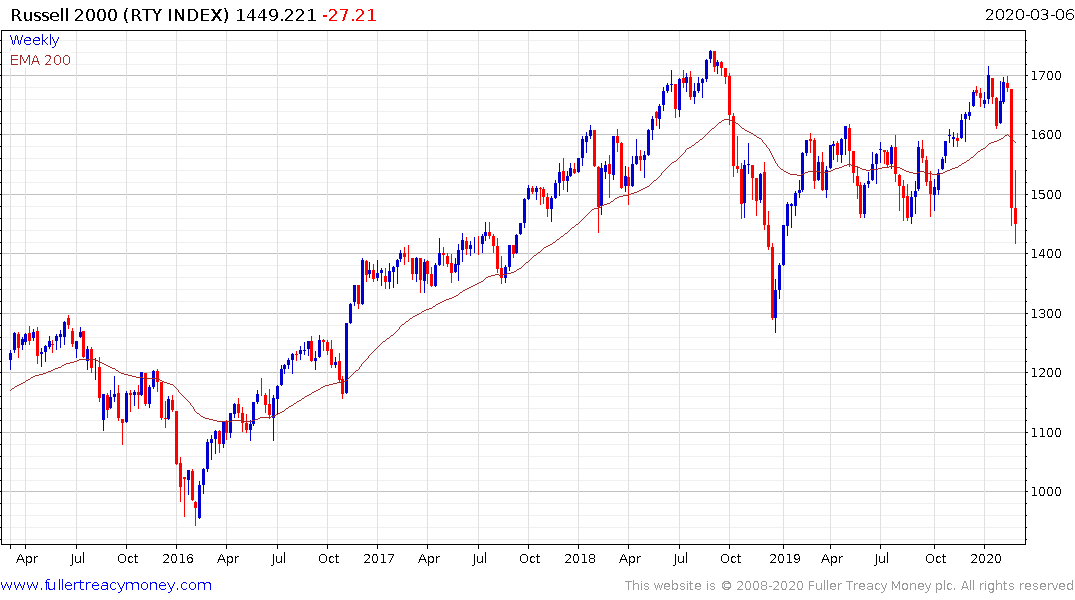 The Russell 2000 broke downwards to new 12-month lows today, having failed to sustain the breakout at the end of the year. A clear upward dynamic will be required to begin to signal a return to demand dominance. 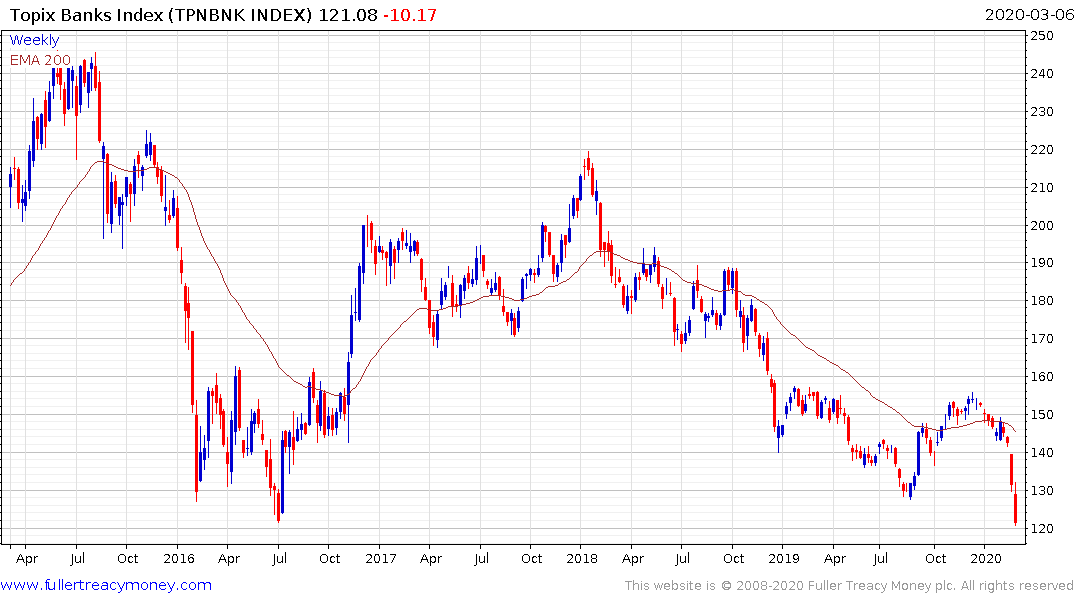 Japanese Banks, which are of the largest buyers of Dollar bonds, continue to trend lower and share strong commonality with banking sectors almost everywhere. 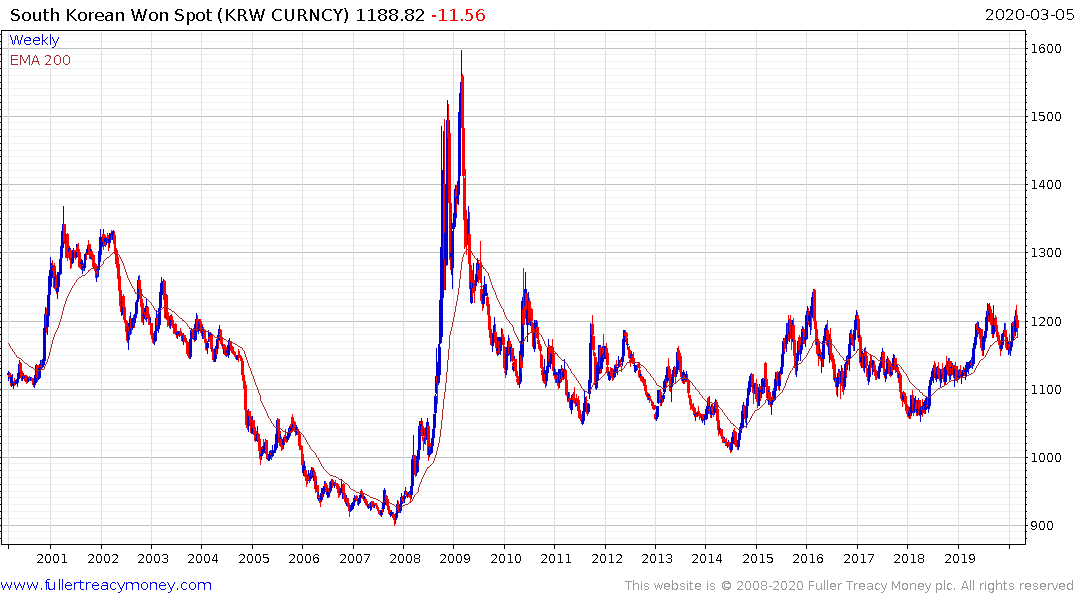 The South Korean Won steadied this week from the region of its lower side of its range against the Dollar. 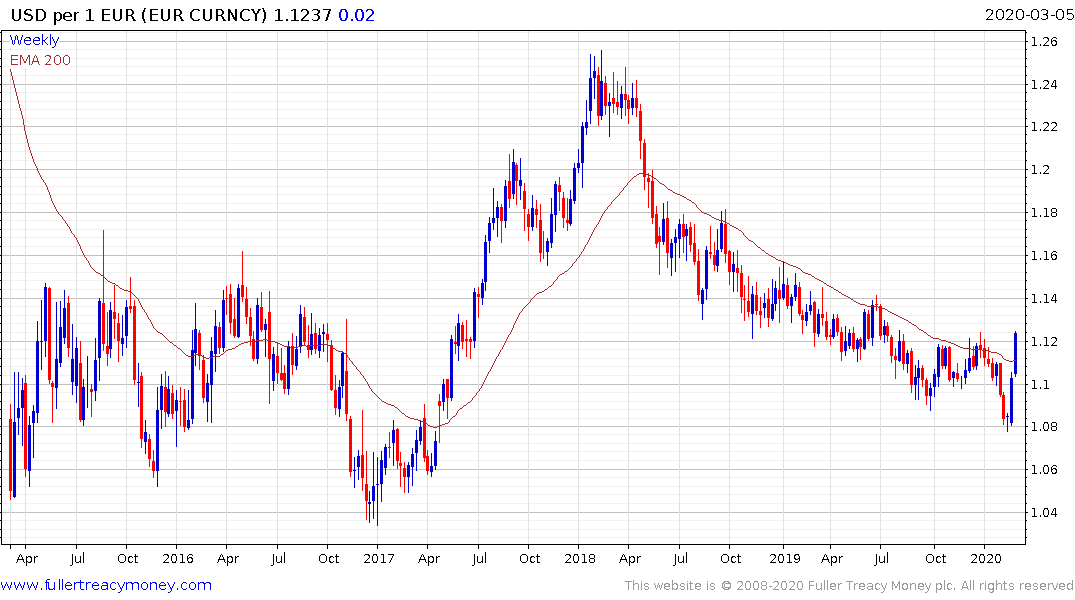 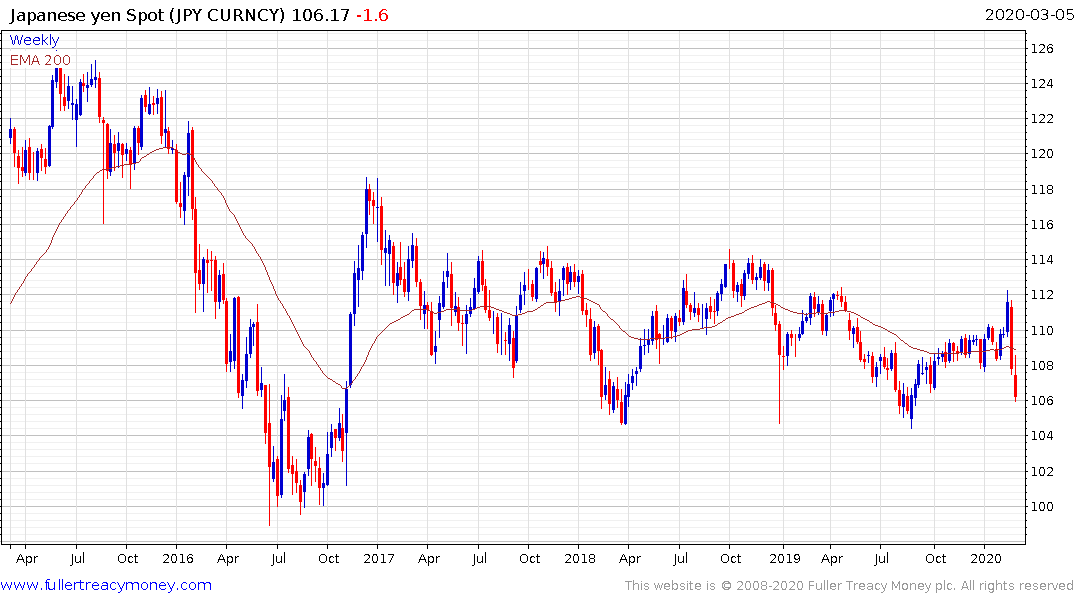 The Euro and Yen have both broken their respective downtrends against the Dollar suggesting clear risk-off turn to trading. 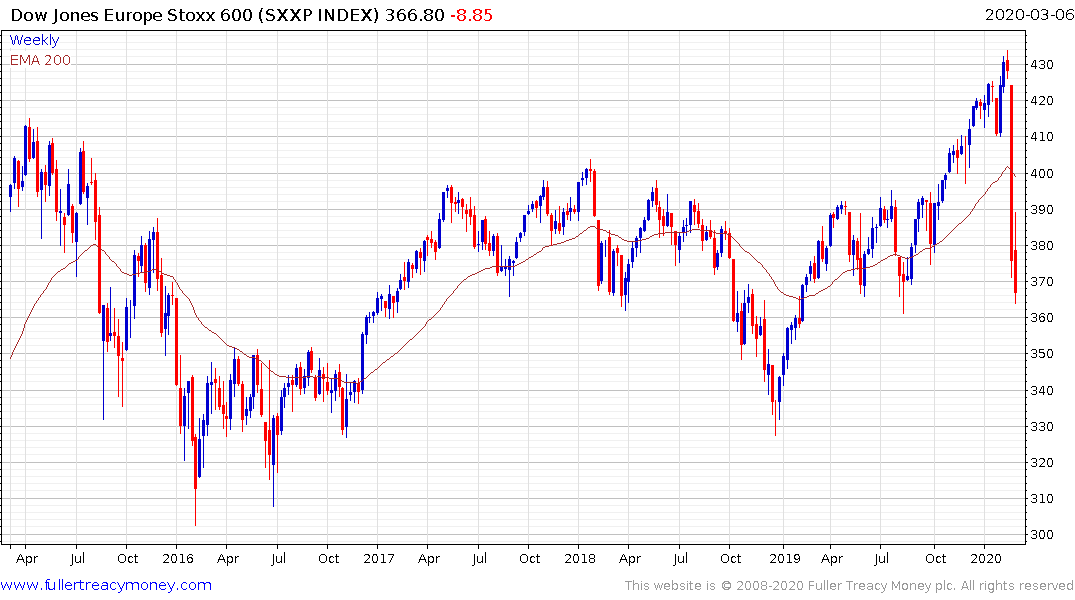 The Dow Jones Europe STOXX 600 has also posted a clear failed upside break and is likely to come back down to testing the lower side of the range near 330. 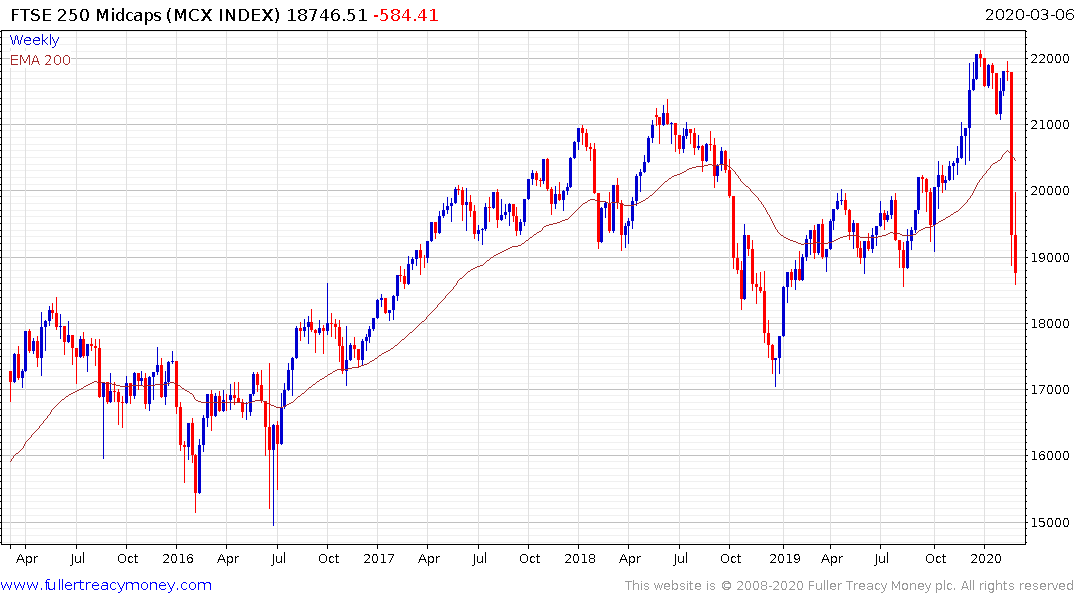 The FTSE-250 pulled back sharply and has also failed to sustain the upward break. It is now testing the lower side of its underlying range.

An increasingly large swathe of the markets is experiencing considerable technical deterioration which will put greater pressure on monetary and fiscal authorities to provide assistance and soon. 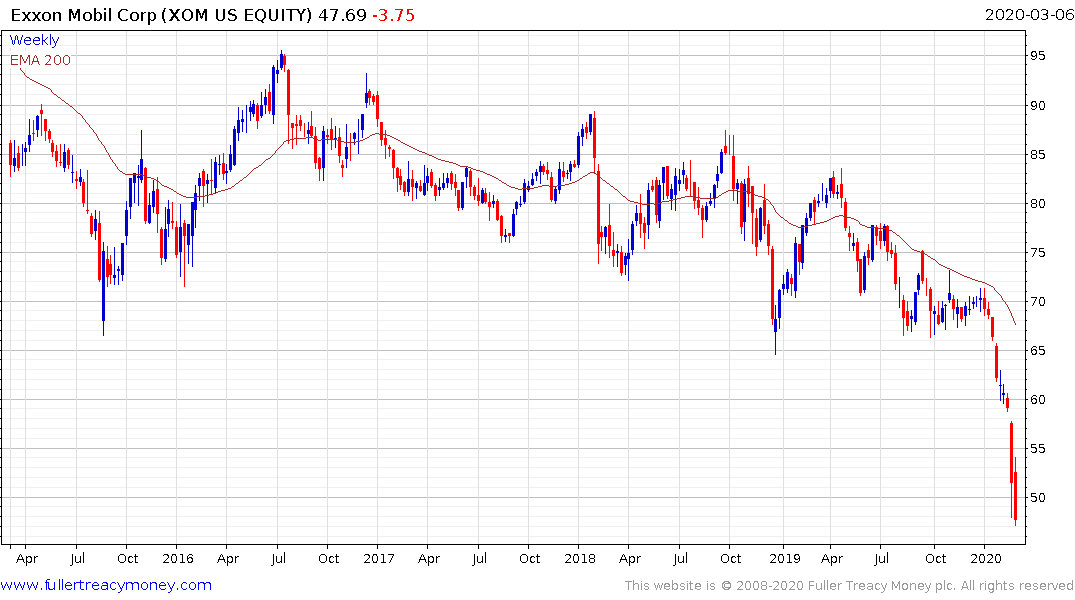 Meanwhile, I remember David quoting a yield of 10% on Exxon Mobil representing one of the clearest value opportunities in 1982. Oil broke downwards today and the share is accelerating lower but its yield is up to 7.25%.

There has never been a recession without the Conference Board US Leading Index Ten Economic Indicators YoY breaking below zero first. It bounced from the lower side of the range at the last update and will next be updated on March 19th.